America’s space program started in Hampton at the NASA Langley Research Center. Throughout the Center visitors can explore the early years of space exploration through current missions with a number of spacecraft artifacts and replicas that highlight the evolution of space flight. 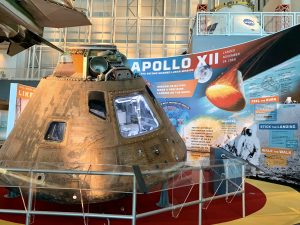 Apollo 12 Command Module: Apollo 12 was the sixth crewed flight in the United States Apollo program to make it to space and the second to land on the Moon. On November 14, 1969, Apollo 12 launched from Kennedy Space Center, carrying astronauts Richard “Dick” Gordon, Alan Bean, and Charles “Pete” Conrad. The capsule weighed 13,500 pounds at launch, orbited the moon 31 times in 61.6 hours, and traveled 960,000 miles on its lunar mission. Apollo 12 returned to Earth on November 24, 1969, with a successful splashdown in the Pacific Ocean. 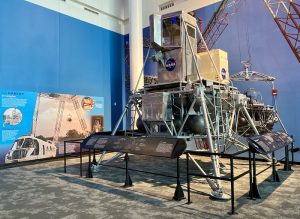 Built in 1965, the simulator is a manned rocket-powered vehicle used to familiarize the Apollo astronauts with the handling characteristics of a lunar-landing vehicle. The simulator was built at Langley Research Center as part of the Lunar Landing Research Facility (LLRF) and is the original trainer used at the NASA Langley Research Center in the 1960s by Neil Armstrong, Edwin “Buzz” Aldrin, and 22 other astronauts who were preparing for their trip to the moon. The simulator, which weighs in at a hefty 8,900 pounds, allowed astronauts to experience piloting problems they would encounter in the last 150 feet of descent to the surface of the moon. 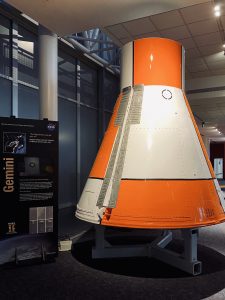 This Gemini test capsule was designed to hold two astronauts. It was used by all of the Gemini astronauts for training in water emergency escape procedures. 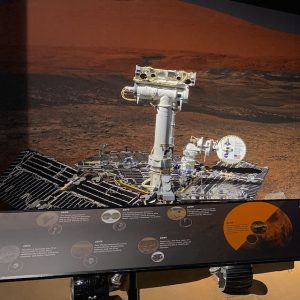 Part of NASA’s Mars Exploration Rover project, two mobile robots named Spirit (launched June 10, 2003) and Opportunity (July 7, 2003) were sent to traverse the Red Planet in search of signs of past life. Since landing on Mars in 2004, Opportunity made a number of discoveries, including dramatic evidence that long ago at least one area of Mars stayed wet for an extended period and that conditions could have been suitable for sustaining microbial life. Contact with Opportunity was lost June 10, 2018 and NASA declared the mission over Feb 13, 2019. 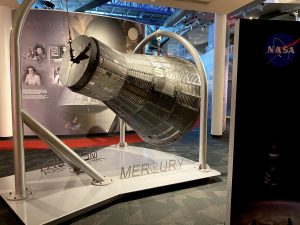 The Mercury 14 was flown, unmanned in the period of maximum aerodynamic pressure, during a launch attempt to test the launch escape system. The objective of Project Mercury was to orbit manned spacecraft around Earth, investigate man’s ability to function in space and recover man, and spacecraft safely. 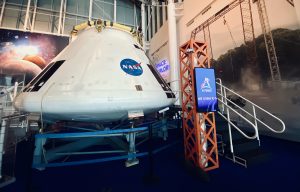 Orion will serve as the exploration vehicle that will carry the crew to space, provide emergency abort capability, sustain the crew during the space travel, and provide safe re-entry from deep space return velocities. The Orion PA1 Flight Test Vehicle Pad Abort 1 (PA1) was the first in-flight demonstration of the Orion launch abort system. The 18,000-pound Orion test vehicle, built at the NASA Langley Research Center in Hampton, Va., was used in the successful test of Orion’s launch abort system, Pad Abort 1 in May 2010. A pad abort would provide escape capability to protect the crews in the event of an emergency during launch or initial ascent. 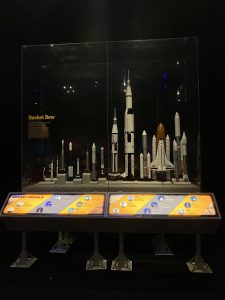 Sounding rockets fly vertical paths carrying scientific instruments from altitudes of forty miles to hundreds of miles. The Virginia Air & Space Science Center features the Orion, Nike-Orion, and Super ARCAS sounding rockets. These rockets gather information from the atmosphere in the gaps between the maximum altitude for balloons (30 miles) and the minimum for satellites (100 miles). 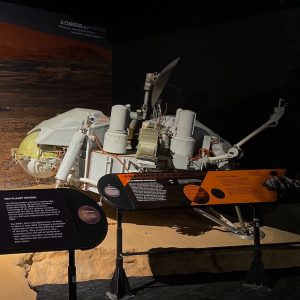 The Viking Project consisted of two matching pairs of spacecraft: an orbiter and a lander (replica on display). The Viking Project made history as the first successful spacecraft to land safely on Mars in 1976. Aboard the Viking Lander was a mini-laboratory to help investigate and search for signs of life. Viking provided an up-close look at the surface of Mars, monitored variations of atmospheric capacity over a full Martian year, and conducted biology experiments to analyze Martian soil. The Viking Lander also took the first color photograph of the Mars surface which showed the “Red Planet” truly red— the result of oxidized iron.