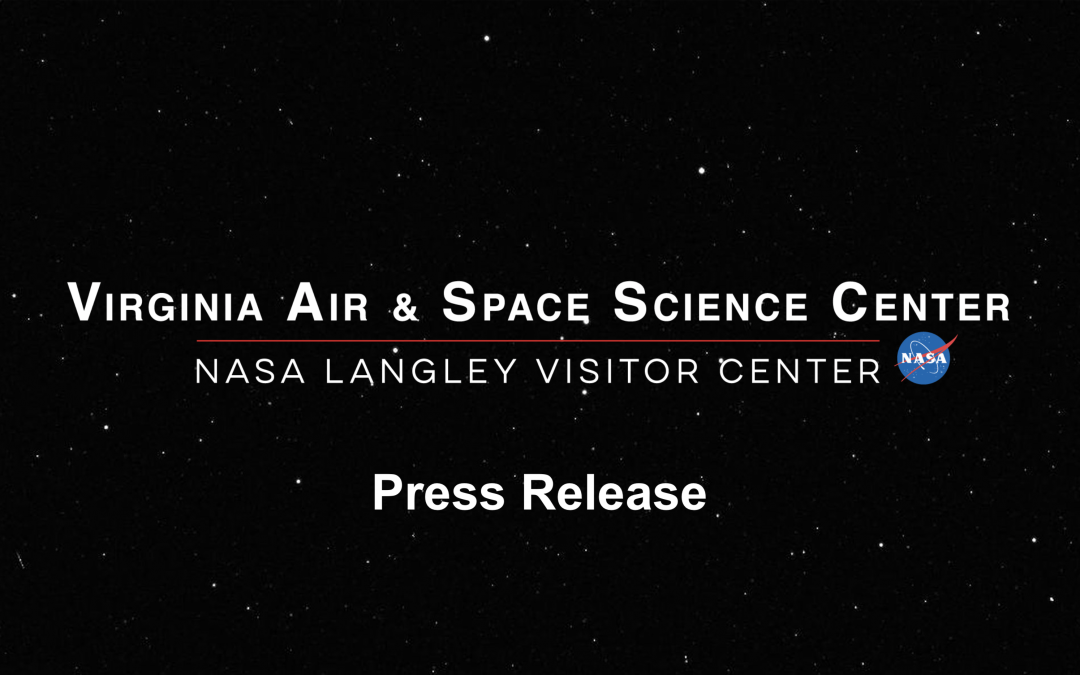 The Virginia Air & Space Science Center made several announcements today. Firstly, Mr. Joseph Ritchie, after completing 4 years as President of the Board, has stepped down as President but intends to remain on the board. Mr. Ritchie is President of Ritchie Curbow Construction Company. He and the family have made significant contributions to the growth and advancement of the Virginia Air & Space Science Center. Joseph Ritchie Sr., founder of Ritchie Curbow Construction Company and former mayor of Newport News (1976-86), made possible, in part, the new exciting and successful Space Explorer Gallery which bears his name.

Dr. Jeffery Smith, currently Superintendent of Hampton City Schools, was elected to be President of the board at its annual meeting on July 26th. Under his leadership as superintendent, academic success is the highest it has been in decades. Robert Griesmer, Executive Director and CEO of the Virginia Air & Space Science Center, said of the transfer of leadership, “My staff and I could not be more grateful for the strong leadership of our outgoing President and generosity of the Ritchie family and welcome the astute and visionary leadership of Dr. Smith.”

At the same time, Mr. Griesmer announced his plans to retire at the end of September. “My wife and I have been discussing retirement for some time now, but there were things that needed to be completed.” The Virginia Air & Space Science Center has recently completed its multi-million dollar capital campaign. A major matching grant from the city of Hampton supported these efforts. The campaign, which lasted longer than expected due to the global pandemic, enabled the institution to accomplish its goal of transformational change to its business model, dual branding campaigns as the Virginia Air & Space Science Center and Langley Research Visitor Center along with the introduction of 21st century exhibit experiences designed to engage the entire family. The major renovations included upgrades to its giant screen IMAX Theater plus the complete renovation of the Space Explorer and Flight Galleries and the newest addition, The SPACE, an early learners’ gallery, an incredible new children’s museum experience.

Mr. Robert Griesmer, Executive Director & CEO, stated “We were determined to redouble our efforts to achieve the goal of long term sustainability. In order to

accomplish this, we had to convert this global disruption into an opportunity for excellence…and we have, mission accomplished”.

The Virginia Air & Space Science Center began its transformational journey in November 2014 under the new leadership of Mr. Robert Griesmer who was charged with the responsibility to bring best practices to an institution. There were several components to charting this transformation: First and foremost, the business model was revamped so as to right size the organization, re-structure pricing mechanisms, staffing, and program activities to maximize earned revenue and increase market penetration rates. At the same time, new partnerships were cultivated with corporations and foundations in order to improve revenue support. Its mission, “inspiring the next generation of explorers’ needed to be, once again, top of mind.

In addition, Admissions, Gift and Food Service operations were important priorities. Gift shop revenue has grown substantially since 2014. It is currently in excess of $6.50 per capita, representing a position in the top 1 percent for science centers in the nation. The admission per capita sales has grown 170% to almost $20.00 at present, based on a bundling of experiences in a new price structure. Price point analysis and product bundling played a significant role in the implementation of strategic business practices. “Donors are investors,” continued Mr. Griesmer, “they expect us to be nimble and smart when investing their support of our mission activities. We ensured the institution stayed in the black even when faced with forced closings. We could not afford to slide backwards…we just refused to allow stakeholder donations to slip away due to not making the required difficult business decisions.”

The price value proposition of the entire visitor experience was brought up to a level where the perceived value for the family experience met expectations. The Virginia Air & Space Science Center returned to its core business and mission thereby meeting the needs of its principal stakeholders. Joey Ritchie, President of the Board, stated, “The Virginia Air & Space Science Center leadership established itself as not just a provider of STEM programs, but as a leader.”- A position it now enjoys in the Hampton Roads region and beyond.

The institution celebrated its 30th birthday this past April, and it continues to prove to the community that it is an essential part of the fabric of the region. A project called STEM 360, which uses a multi setting and multi-platform system approach to enhancing STEM learning, has now been recognized in publications that are distributed around the world. Conceived by Mr. Griesmer, with research design developed by Dr. John Falk, a worldwide leader in free choice learning, have jointly and individually published the results of the STEM 360 research conducted at The Virginia Air & Space Science Center. The staff team has worked hard and long hours to make this innovative project

a source of pride for the institution. Dr. Smith, added, “The STEM 360 Project stands as an outstanding and innovative research program that will continue to deliver dividends to the Virginia Air & Space Science Center’s reputation for years to come.”

A major element of the institution’s transformation is the Space Explorer Gallery, which opened in December of 2020 and has been a tremendous success. Visitors of all ages are being engaged and inspired in space science through highly interactive, digital, and

tactile exhibits. One mom wrote, “We were there for three hours, and the kids did not want to leave, the oldest child, my husband, insisted we return the next day…and we did.” Mary Sandy, Executive Director of Space Grant, and a member of the board, stated, “We could not be more pleased with these kinds of endorsements.”

Due to the success of the Space Explorer Gallery, the next gallery phase opened this summer which focuses on families and early learners. We are excited to announce The S.P.A.C.E. (Smile, Play, Achieve, Create, and Explore). This new Early Learners Gallery will be the newest addition to the Hampton Roads children’s museum experience. Some of the experiences include:

“This new space, “The S.P.A.C.E.”, completed the capital campaign that began with the idea that parents expect value when they visit free-choice learning centers like the Virginia Air & Space Science Center. When they make those important decisions about time and money to be spent, we want the Virginia Air & Space Science Center to be at the top of their list,” Griesmer added. “We are looking forward to continued growth and having an increased economic and educational impact on the communities we serve, and finally, now, I can retire with the feeling of success and pride in the institution I led,

the community I served, and the staff that will take this institution to only greater heights of excellence,” Griesmer concluded.

The mission of the Virginia Air & Space Science Center is to educate, entertain, and inspire explorers of all ages. It is located at 600 Settlers Landing Road, Hampton, VA.